Although I have heard two different reasons for the use of poppies to symbolize Remembrance Day (or Veterans day for my Canadian friends) I like this version.

John McCrae, a poet and physician from Guelph, Ontario, Canada lost his dear friend, Alex Helmer during the second battle of Ypres In the Flanders region of Belgium. He presided over his friend burial and noticed that poppies quickly grew around the graves of soldiers who died during that battle. It is said that the damage done to the landscape increased the lime content in that region so one of the only plants able to grow were poppies. 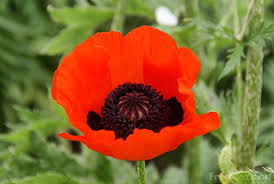 It is said that John McCrae wrote the poem, In Flanders Field, after he buried his friend.

From a 1919 collection of McCrae’s works…

In Flanders fields the poppies blow
Between the crosses, row on row,
That mark our place; and in the sky
The larks, still bravely singing, fly
Scarce heard amid the guns below.

We are the Dead. Short days ago
We lived, felt dawn, saw sunset glow,
Loved and were loved, and now we lie
In Flanders fields.

Take up our quarrel with the foe:
To you from failing hands we throw
The torch; be yours to hold it high.
If ye break faith with us who die
We shall not sleep, though poppies grow
In Flanders fields.

Although the poem was once used as propaganda to raise money for the war effort the the sale of war bonds, I personally will use it to remember and honor those who have given their lives so that we can live in a world where we are truly blessed.

THANK YOU TO ALL WHO HAVE SERVED.